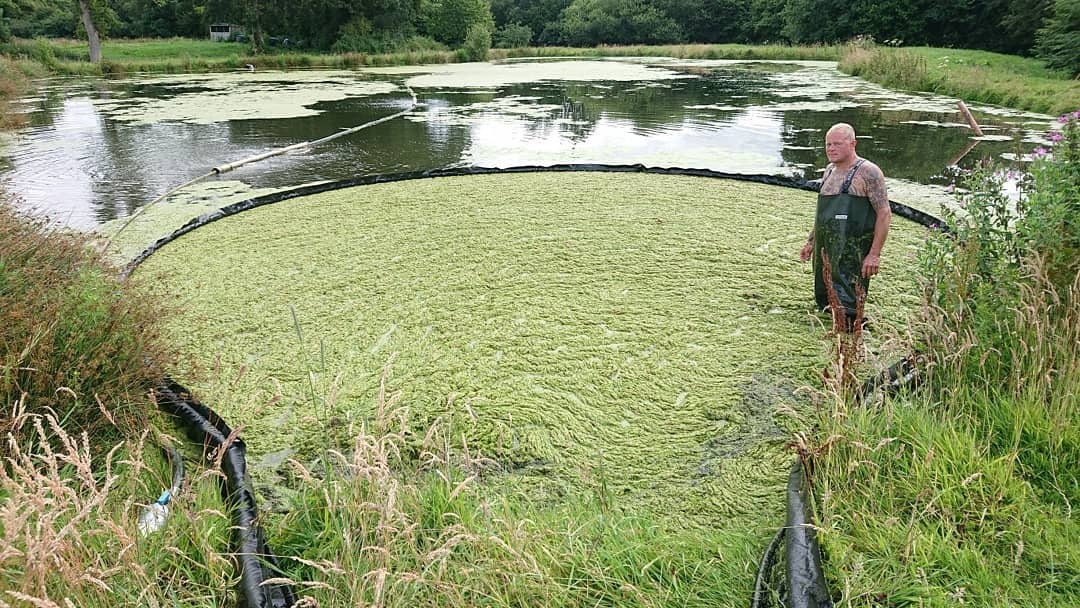 Feeding on the farm and weed management

As I sit and write the latest blog it is early August, the skies are grey and the air pressure is low, typical August weather, high pressure one minute followed by lows the next.

Hopefully, you found the information useful in last month’s blog regarding Oxygen monitoring, especially at this time of year where things can change overnight.

Over the next few months, we can see some of the biggest weight gains on the fish farm. The temperatures will often remain high day and night, meaning the fish’s metabolic rate increases and they are able to convert the food more efficiently. 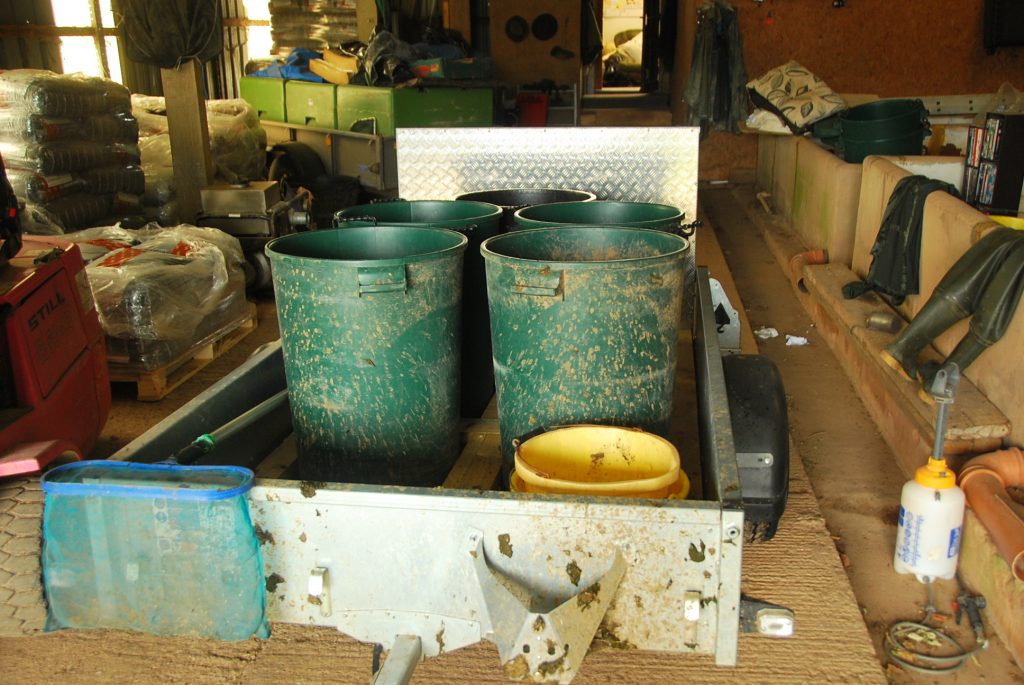 During the summer months we monitor the progress of our fish on a weekly basis to ensure we are feeding the optimum feed ration daily. This is important for 2 reasons. Firstly, to make sure the fish are maximising their potential growth during the warmest months and secondly to manage the water quality.

Before we feed in the morning, we take our DO (Dissolved Oxygen) readings and drag the feeding spot with a swimming pool net to assess if the feed ration has been eaten from the previous day.

Providing the oxygen levels are desirable and the food ration has been consumed then we feed.

All our feed rates are calculated in the spring when the ponds are fully stocked for the summer ahead. The fish are sampled and weighed into the pond to give us a starting weight. From that point we calculate the daily ration based on a percentage body weight/day.

Every few weeks we will adjust the food ration, to allow for the addional growth from the start weight. We base this on a 2:1 ratio, which means for every kg of food that the fish consume we expect half (500g) to be converted into growth. 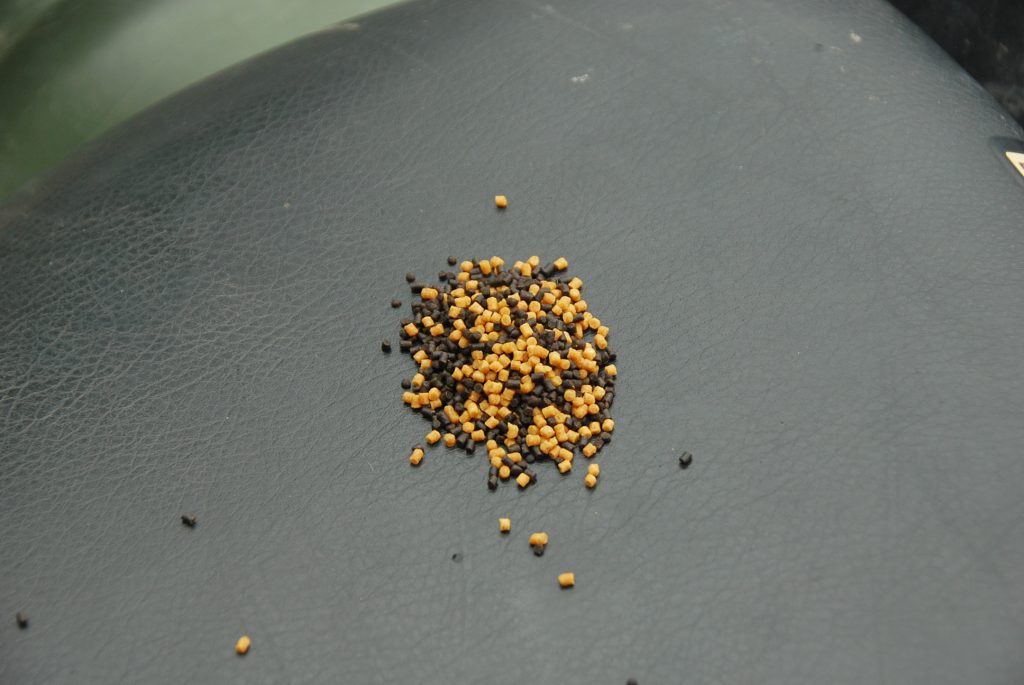 Now I know this is probably best-case scenario to get a 2:1 conversion rate, but we find this gives us the most accurate way of feeding our fish. As previously mentioned, we drag the feeding spots daily, so if the fish do not take the increase immediately then we can reduce the ration until we find all the food is gone.

During the warmest months we will increase the ration to 1.5%/day. The only fish that we feed a higher percentage body weight per day are the C1 and C2 Carp. Carp at this size are growing at such a fast rate that they can easily convert 2- 5% + bwpd. 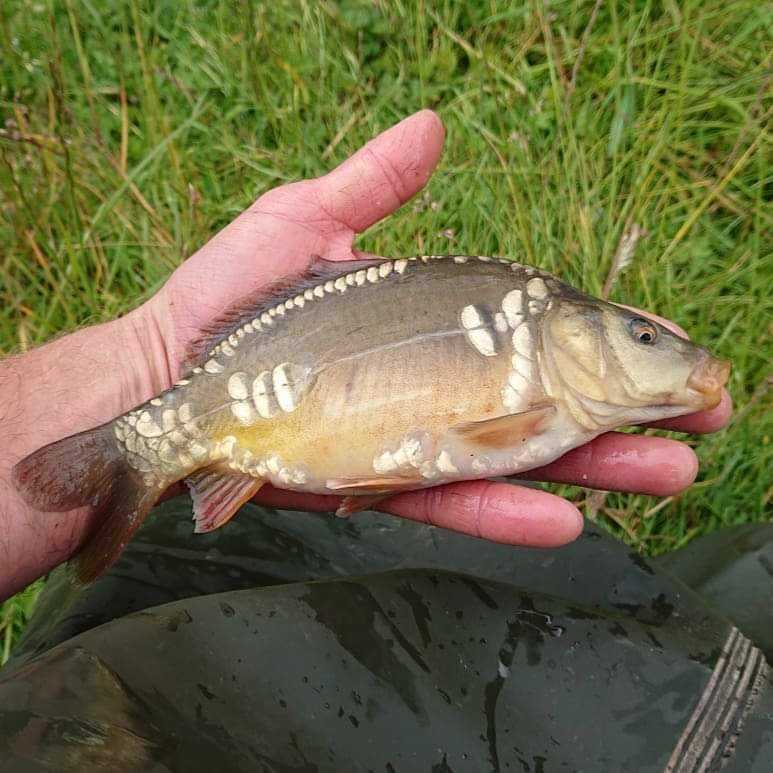 Feeding on the farm is never an exact science, as there are many environmental factors than can affect how much the fish will consume daily. Oxygen levels, water temperature and water quality all have influences on the fish’s appetite.

Because of the quantity of food being used on the farm we continually monitor the ammonia levels to ensure levels are not spiking. If we notice an increase in ammonia, we can adjust the feed rate and increase water flow until the levels reduce.

Getting the feed levels right will give the best growth during the warmer months and ensure that food is not wasted. Being the biggest overhead in fish farming, the last thing you want to do is waste feed.

Every year on the farm we battle the weed growth from early May until end of September.

The submerged weeds will start growing early spring and later in the summer we are troubled with surface weeds and filamentous algae.

Because of the limitations in treatments now available in Europe we must rely on removing the weed manually.

Most of the ponds are shallow enough to wade out and collect the submerged weed. The root material is easily removed from the silt and placed on the bankside.

Curly leaf pond weed, elodea and hornwort are common place on the farm. Usually the tench and Crucians ponds suffer with weed growth because the water clarity is better, allowing for light penetration, which promotes weed growth.

We have experimented with dyeing the ponds to reduce the weed growth and found that it had moderate results. I believe this is partly down to the fact that our ponds, as a rule are shallow, with a high water turn over due to the springs around the site. 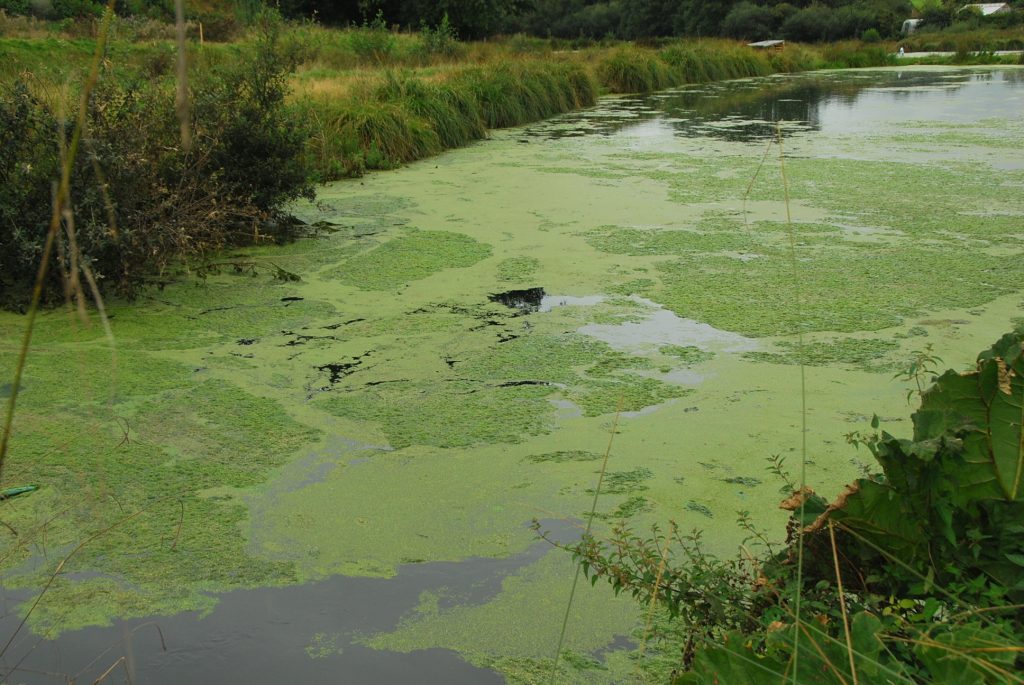 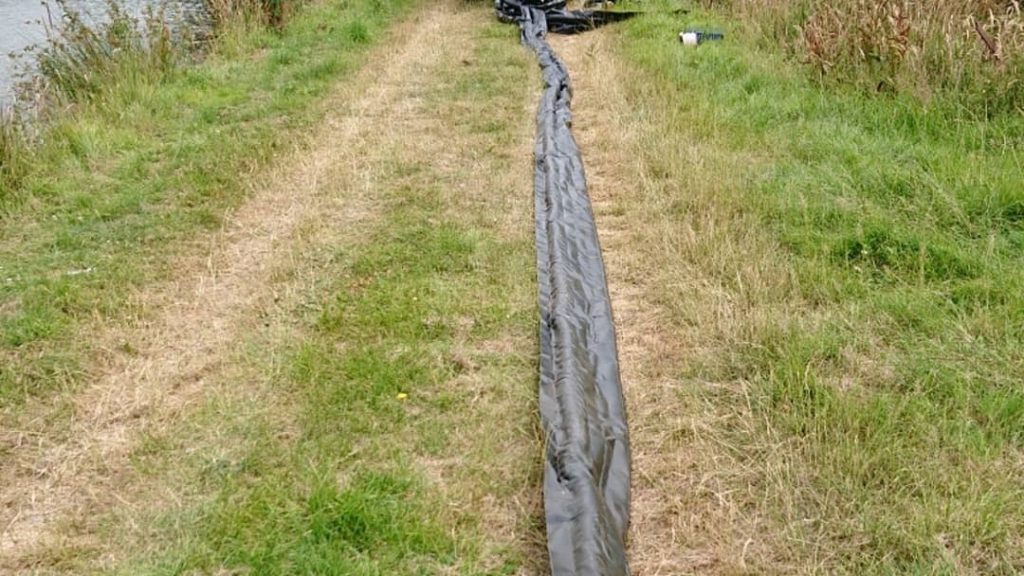 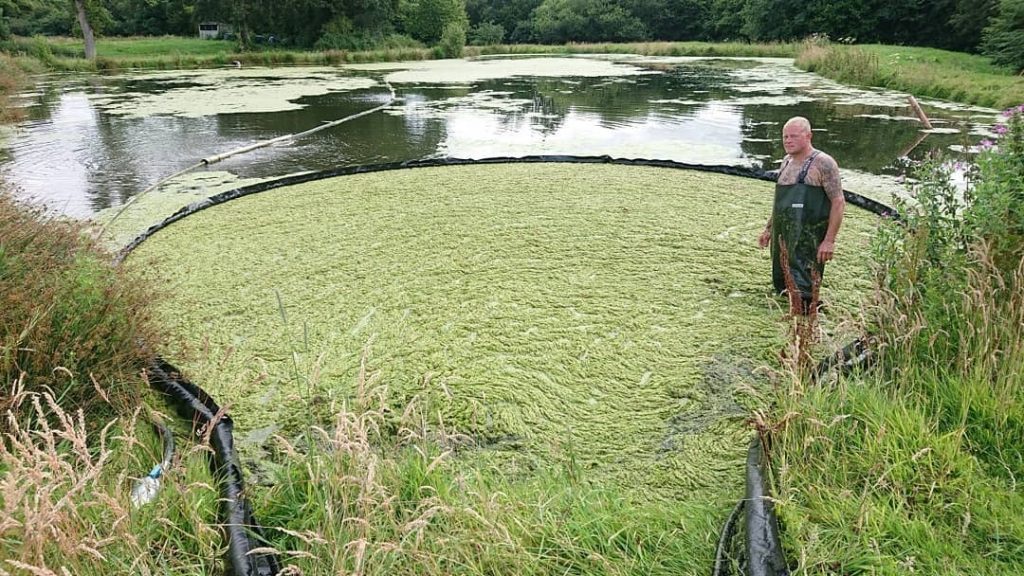 The easiest option for preventing weed growth is to have a higher stocking density to colour the water, however this is counter-intuitive for optimum growth and fish husbandry in relation to water quality.

Every year we have discussions with clients regarding weed management strategies. This may include seasonal cutting to reduce the abundance of weed, but also carful consideration of chalk application. The reason why I wanted to mention chalking is because it seems to be more common place in fisheries management, and in the right situation it is a fantastic option for managing the build up of organic matter and promoting naturals within the fisheries.

Equally it can create more weed growth when applied to a pond. Getting advice from experienced fishery managers/Consultants is always worthwhile, as they will advise on which method(s) is most suitable for your fishery.

We are always at the end of the phone or email for help and advice, so please do not hesitate to call.

Join me next month where we will be looking at the preparation for the start of the harvesting season.